RISING powerfully above the loss of Paul Gascoigne, with damaged ligaments, going a goal behind, missing a penalty, having a valid goal disallowed, Spurs still defeated Forest in extra time; and deserved to. Their players matched the occasion; Forest's fell below it.

How sad an anti-climax it was for Gascoigne. One might almost have feared as much. Quit while you're ahead, the Americans say, but how could a player with Gascoigne's appetite and ambition quit before a Cup final? A final, moreover, into which he had put Spurs with his glorious display against Arsenal. There was every reason to feel he should not have played in that game, at all, so soon after his operation, every reason to fear that he might suffer from the reaction, when the final took place. So he evidently did.

Quoting the French, rather than the Americans, Gascoigne had a bad quarter-hour, a very bad quarter-hour, in which his physical problems were plain. He was responsible for Forest taking the lead with Pearce's goal, and almost immediately afterwards, he collapsed, went off on a stretcher, and gave way to Nayim. 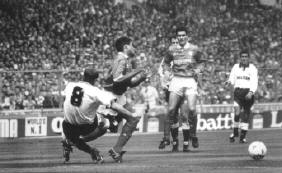 Almost from the beginning you could see that Gazza was in trouble. There was a desperation about his play. It was only in the second minute that he lunged in, a bad foul, on Parker, leaving the Forest midfielder on the ground. Right on the quarter-hour, back on the edge of his own penalty box, he committed another reckless foul, this time on Charles, the Forest right-back. A dangerous thing to do when you have a free kick taker like Pearce against you. Almost as dangerous as when you have Gascoigne himself as an opponent.

Gascoigne takes the free kicks with his right foot, Pearce with his left. The drive was ferocious; Thorstvedt did not get near it. As if this were not bad enough, Gascoigne, soon afterwards, crumpled to the ground and there was the chilling sight of the Tottenham players gesturing for a stretcher. Off went Gazza, on went Nayim. I wonder what Lazio think about their expensive purchase now. It is notionally not too late for them to back out, for Gascoigne has still not put pen to paper. If they do sign him, which is surely the gamble of all gambles, how long will it be before he is even fit to play?

Lineker got the ball in the Forest net, but was ruled offside (TV replays contradicted the linesman). Off in the 25th minute went Forest to the other end. Spurs may have had five men in midfield, but their defence was found horribly wanting, when, at the end of a skilled move, Woan squared the ball to Crosby, totally and criminally unmarked in the outside-right position. He should have scored, but Thorstvedt, rising above the cause of duty, stopped his shot.

Almost at once, Tottenham struck back against a Forest defence which scarcely looked any more solid than their own. A neat move on the left saw Nayim confidently back-heel to Lineker, whose cross was met by the head of Allen. Crossley held the ball well. Three minutes past the half-hour, and the game dropped into deepest controversy. An inspired pass by Stewart, beautifully angled, released Lineker. The England captain easily negotiated Crossley, the Forest keeper, who promptly brought him down. A penalty, certainly, but should not Crossley automatically have been sent off under this season's Fifa dispensation? I have always felt a penalty to be sufficient punishment for a foul in the box, but that is not what the current ruling says, and Roger Milford, the Smiling Referee, was surely obliged to expel Crossley. Had he done so, it is to be supposed that Lineker would have scored against his substitute. As it was, Crossley showed that crime can sometimes pay.

Spurs might have conceded another goal early in the second half, but Howells, having got them into trouble with a miscued back pass, which put his own keeper out of the picture, atoned when he hooked away Keane's lob. So Spurs, in the 56th minute, were able to equalise. Nayim, an influential figure, played a difficult ball from the left nicely to Allen. He laid it off in turn to Stewart, another forceful figure in the Spurs midfield, and Stewart's low, angled shot found Crossley no longer the goalkeeper he was when facing Lineker's penalty. Crossley, however, redeemed himself in the last minute of normal time with a glorious one-handed save from Howells's header to Nayim's right-wing corner. So there was extra time.

Funny game, football. Within just a few minutes, Crossley was in trouble again, and Tottenham had taken the lead. A cross by Van den Hauwe, a header by the Spurs substitute, Walsh, which found Crossley marooned, and the ball came back from the bar. A corner resulted. Nayim, growing constantly in stature, took it from the right, Stewart, of whom the same might be said, headed on; and poor Des Walker, never as dominant as you might have expected, nodded into his own net. 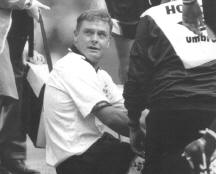 But then, it was a day of disappointing performances by Forest players. Crosby flattered to deceive, Clough and Keane were sadly spasmodic, Woan and Glover ineffectual. Is there life after Gazza? Emphatically. 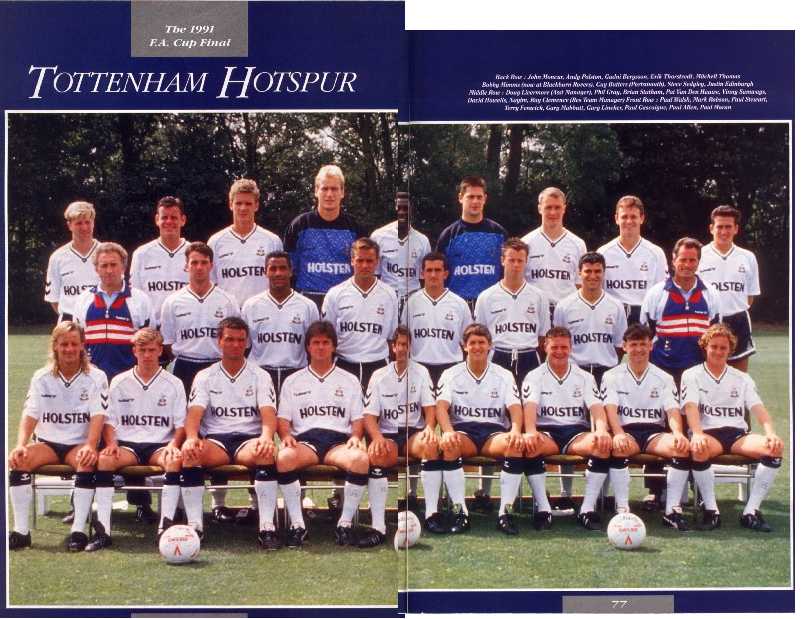 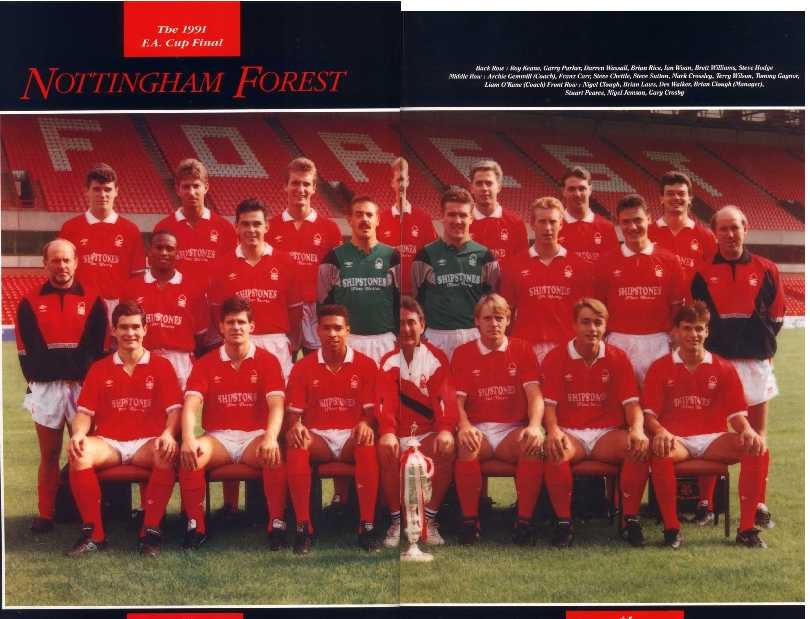 Routes to the Final 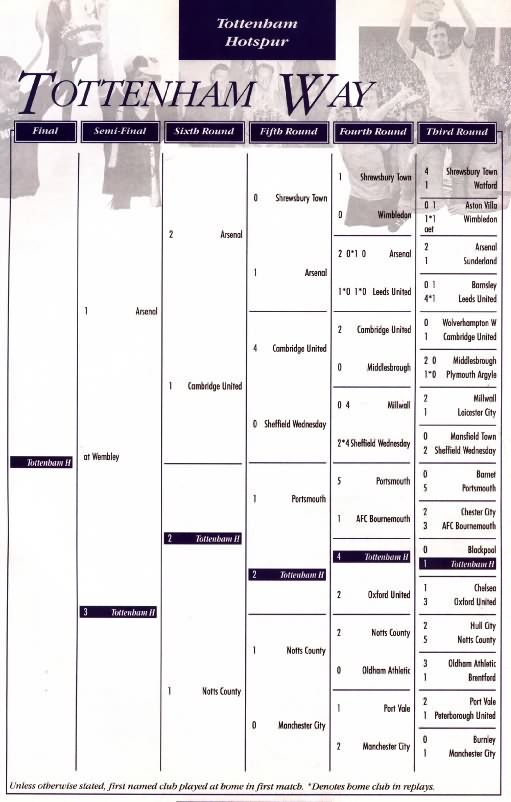 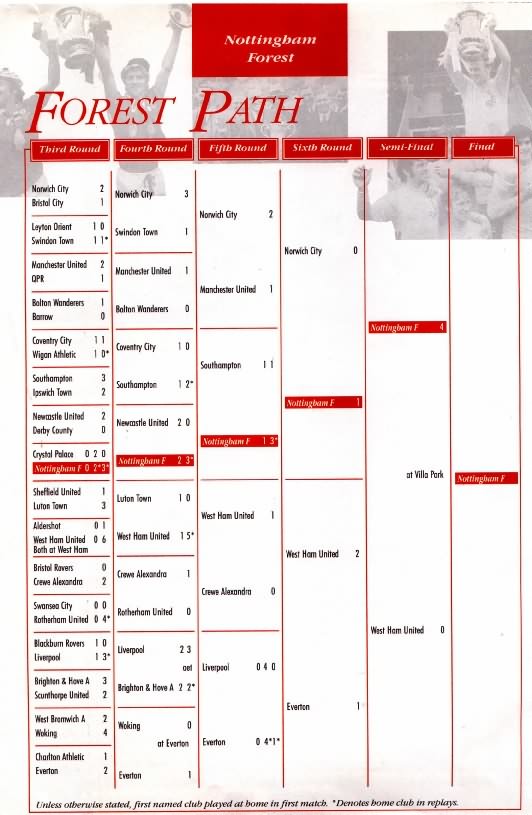