The 1953 Final has been dubbed the 'Matthews Final'. No one else could have rescued Blackpool from the plight they found themselves in ten minutes after the interval when the injured Bell headed home Hoiden's cross to put Bolton 3-1 up. 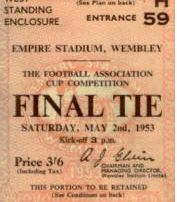 At this Blackpool might have crumpled as they had done twice before at Wembley. Instead, Matthews, for whom the whole world crossed its fingers as he strove for the third (and perhaps the last?) time to gain a Cup-winners' medal, stepped forward to dominate the green stage.

The match had begun dramatically, with Lofthouse scoring for Bolton after only seventy-five seconds. Hassall deflected Mortensen's shot into the net to provide Blackpool with an equalizer, but within minutes Bolton were ahead again from Langton's cunning Job.

It was not until the last quarter of the match that Blackpool clicked into gear, and Matthews proved to be their inspiration. Twenty-two minutes from the end Mortensen met one of Matthews' spinning, curling crosses at the far post to make it 2-3. 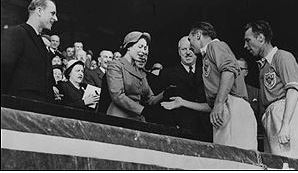 Chances went begging until Mortensen scored direct from a free-kick three minutes from time. With only seconds left Matthews went inside the full-back, sprinted for the by-line, and in the last yard cut back a diagonal pass. Mortensen was too far forward, but Perry was on hand to shoot home inside the post.

Stanley Mortensen makes the score 3-3 direct from a free kick. 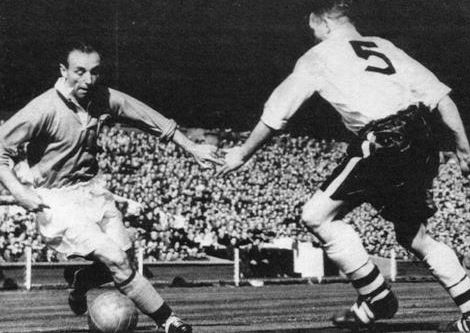