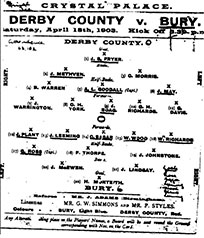 Derby were without the injured Bloomer for the Final, but even so they had a strong side on paper. Yet the match turned out to be one of the most one-sided ever played, and Bury's 6-0 victory still stands as the record Final win. Bury also equalled another record, winning the Cup without conceding a goal in any round.

Derby's play was so inept that Bury were never fully extended. Monteith, the Bury goalkeeper, had nothing to do, though the ex-West Ham and Bristol City man had certainly had his capabilities thoroughly stretched at Sheffield in the second round. Defenders McEwen and Ross, the latter captain, contributed much to Bury's crushing victory. Richards was brilliant in attack, though he didn't score, and Leeming. who got a couple, showed himself to be a more than useful player, if a little slow.

Ross, Sagar, Wood and Plant scored Bury's other goals. For Derby, who could do nothing right, matters were made worse when their goalkeeper, Fryer, as he tried to save a goal, collided with Sagar. and, after sticking gallantly to his post for a while, was forced to retire in the sixty-fifth minute after Bury had completed a murderous four-goals-in-twenty-minutes. 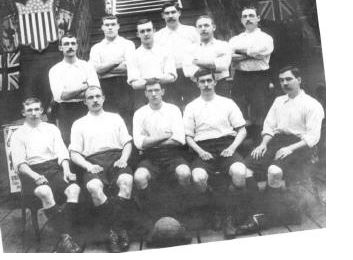