Above: Teams Make Their Entrance onto the Pitch

The 'Chessboard Final' of 1962 was a mixture of patience and artistry, rather than fire and passion, and some thought the match strangely flat and lacking in excitement.

Above: Tottenham's Ron Henry at the bottom of the pyramid

No team had lost a Wembley Final after winning there a year earlier, and Burnley's hopes of forcing Spurs to become the first side to do so took a jolt as early as the third minute, when Greaves scored. Tottenham kept their lead to the interval, but Burnley were level a few minutes later. Pointer swept the ball out to Harris on the left and Robson diverted his centre between Spurs goalkeeper Brown and a post-the one hundredth goal to be scored in a Wembley Final.

Ten minutes from time Spurs ended the doubts. Smith appeared to foul Blacklaw as they went up for White's lob into the middle, and when Medwin hit the loose ball goalwards, Burnley centre-half Cummings handled on the line. Blanchflower sent Blacklaw the wrong way with the spot-kick. 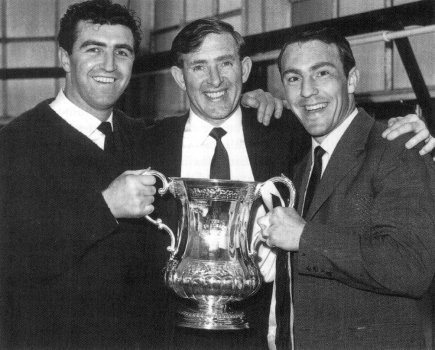