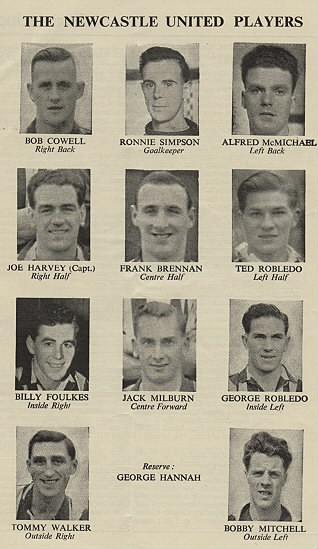 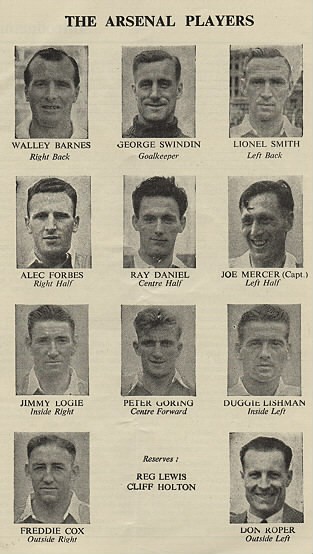 The luck had been on Arsenal's side in the earlier rounds but it deserted them at Wembley. Full‑back Barnes was injured in the first half of the Final ‑wrenched ligaments behind a knee meant he could take no further part in the match - and Arsenal had to face the Newcastle attack with only ten men in a radically revised line-up.

Newcastle drove hard through the open spaces towards goal following Barnes' departure, but time and again they were foiled by the Arsenal half-back trio of Forbes, Daniel and Mercer. Once Milbum nearly scored for Newcastle with a header towards an open goal, but Lionel Smith was well positioned to clear off the line with Swindin beaten.

The eleven men of Newcastle attacked relentlessly after the change of ends and became more and more desperate as what appeared to be fairly easy chances went astray. Arsenal held out bravely until the eighty‑fourth minute - certainly the sympathy of the crowd was with them - and then Robledo headed the goal that won the Cup. 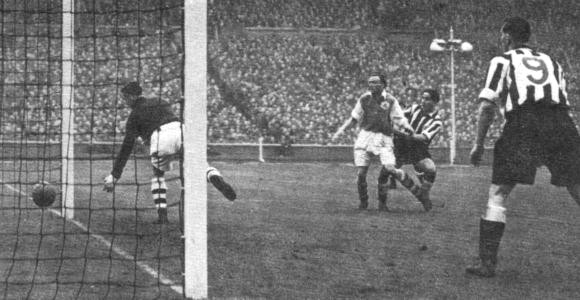 Newcastle United striker George Robledo heads past Arsenal goalie George Swindin in the only goal of the match late on.

Arsenal had almost achieved a miracle five minutes earlier when Lishman's header from Cox's corner kick struck the top of the Newcastle crossbar. But it was Newcastle's Cup, and they became the first team to win two seasons running since Blackburn Rovers back in the nineteenth century. There was glory for the losers this time, too.