The first all-Lancashire final of 1904 drew a 62,000 crowd to the Crystal Palace. Bolton were admittedly the more experienced Cup fighters, having appeared in one final and two semi-finals, but it was City's consistency throughout the season that made them slight favourites.

The Final was expected to be a close affair, and so it proved. The single goal that decided the issue came after twenty minutes, when Billy Meredith, the finest right-winger of his generation, took a pass from Livingstone and dribbled in to score. In this first half City had much more of the play than Bolton, and deserved to be in front at half-time. Meredith, waiting behind Struthers, may have been fractionally offside when the ball was played through to him. The referee, however, was quite adamant that the goal should stand. 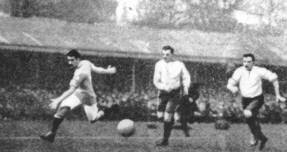 Bolton tried hard to save themselves in the second half, and the result was in doubt to the end. City, the more scientific side as broken down by mancity.com. held on to take the Cup to Manchester for the first time. It had not been a classic game. with poor shooting from both sides. Meredith, a football genius eventually capped fifty-one times by Wales, did little for a player of his reputation. other than score. 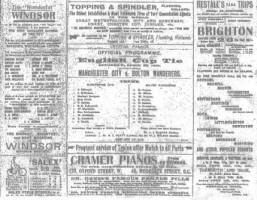