Wanderers become the first ever FA Cup winners with just a single goal being enough to defeat Royal Engineers.

For the first FA Cup final at the Oval in 1872, there were less than 2,000 spectators, the numbers kept down according to Bell's Life by the exorbitant entrance fee of 1/-! It was C. W. Alcock who made the proposal to start the competition when there were just thirty clubs in membership of the F.A. and the game was 'rather a recreation for a few public schoolboys than a truly National sport'.

He was described as 'a man of fine and commanding presence who had a happy knack of persuading people to his way'. How fortunate that he persuaded the small committee of seven that assembled in the Sportsman Office on July 20th 1871 "that a Challenge Cup should be established in connection with the Association, for which all Clubs belonging to the Association should compete'.

15 Clubs entered that first season, Donington Grammar School and Queen's Park, Glasgow, the only two from north of Hertfordshire. Queen's Park was perhaps the most surprising entrant-particularly as the £1 entrance fee amounted to almost a sixth of the Club funds at the time.

They were allowed a bye to the semi-final and given the promise that the final would be played the next day if they won to save the expense of an extra trip. In fact there was no score in their game with the Wanderers and they withdrew, rather than face the cost of a replay. So the Wanderers were through to the Final. Their opponents, the Royal Engineers of Chatham, were the leading team of the period and the odds were quoted as 7-4 in their favour. Not for the last time the favourite lost. Lieutenant Cresswell broke his collarbone after ten minutes play and a single goal from M. P. Belts gave Wanderers the Cup.

Wanderers had drawn a hard, goalless semi-final tie with Queen's Park and won a place in the Final only because the Glasgow team could not afford to travel back to London for a replay.

The historic first Final took place at Kennington Oval on 16 March 1872, before a crowd of 2,000. At that time football matches were played without crossbars or goal-nets. There were no free-kicks or penalties, and the pitch markings did not include a centre-circle or a half-way line. 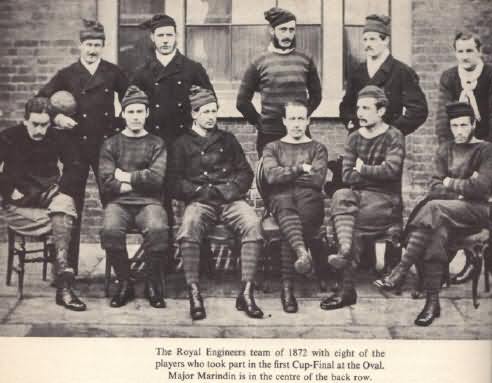 The Royal Engineers team of 1872 with eight of the players who took part in the first Cup-Final at the Oval. Major Marindin is in the centre of the back row.

Wanderers gained the first of their five victories in the competition, but it was only by a single goal scored by Belts, mysteriously playing under the pseudonym 'A. H. Chequer'. Wanderers had the pick of all the best players who had been at the public schools and universities, yet it was the Royal Engineers from Chatham who took the field as favourites at odds of 7 to 4 on. Not for the last time, the favourites went down in the Final. Engineers were particularly unlucky in that Lieutenant Creswell broke his collar-bone after ten minutes - the first recorded accident in football.

Once Betts had scored from an acute angle after Vidal's long dribble had made the opening, the Engineers did well to keep the margin of defeat down to one goal.

C. W. Alcock, Secretary of the Football Association, had been the one to table the resolution to start a Cup competition that he believed would fire interest in the game. Fittingly, it was Alcock who captained Wanderers to victory in the first Final. They had six future internationals in their side, and their best players were probably Hooman of Charterhouse and Vidal. 'the prince of dribblers' from Westminster. The Rev R. W. S. Vidal, who also played for Oxford University, once scored three goals in succession from the kick-off in one match, without an opponent touching the ball - a tribute to his legendary dribbling skills. Wanderers' goalkeeper Bowen was still an outstanding player at thirty-six - no mean achievement in the days when training was unknown and goalkeepers were fair game for the heaviest of charges, whether they had the ball or not.

The first Cup competition had been riddled with byes. exemptions and unfinished ties. Wanderers reached the Final, but Harrow had scratched to them in the first round, and they had failed to win both their quarter-final and semi-final ties.